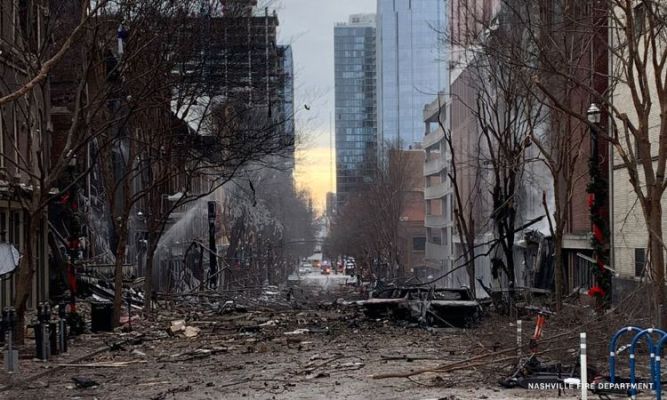 What a time to be alive. It makes you wonder what’s next. There were those who made the mistake of thinking that there would be nothing short of a magical transition from 2020 to 2021. Surely the craziness of 2020 couldn’t follow us into a new year. As ludicrous as this may seem to a minority of people, common sense points many more of us in the direction of sanity. In other words, it is only when the Deep State is utterly destroyed that things will be different. Don’t worry! It’s coming soon!

It’s possible that the weapon used in Nashville was not a laser. While it’s likely true that it was fired from space, the manner in which it causes explosions is pretty mind-blowing. What are actually fired are solid narrow tungsten cylinders that resemble the shape and size of telephone polls. The more that are fired simultaneously at one time, the more destructive the blast is. I believe up to 12 of them can be shot off at the same time. The force that drives one of these cylinders toward Earth’s atmosphere is powerful. That force then combines with the pull of gravity once it makes it through the atmosphere. By the time it hits its target, it’s traveling faster than the speed of sound. This new weapons system is called “The Rods from God.” More evidence is showing that the Nashville explosion could have been caused by the good guys.