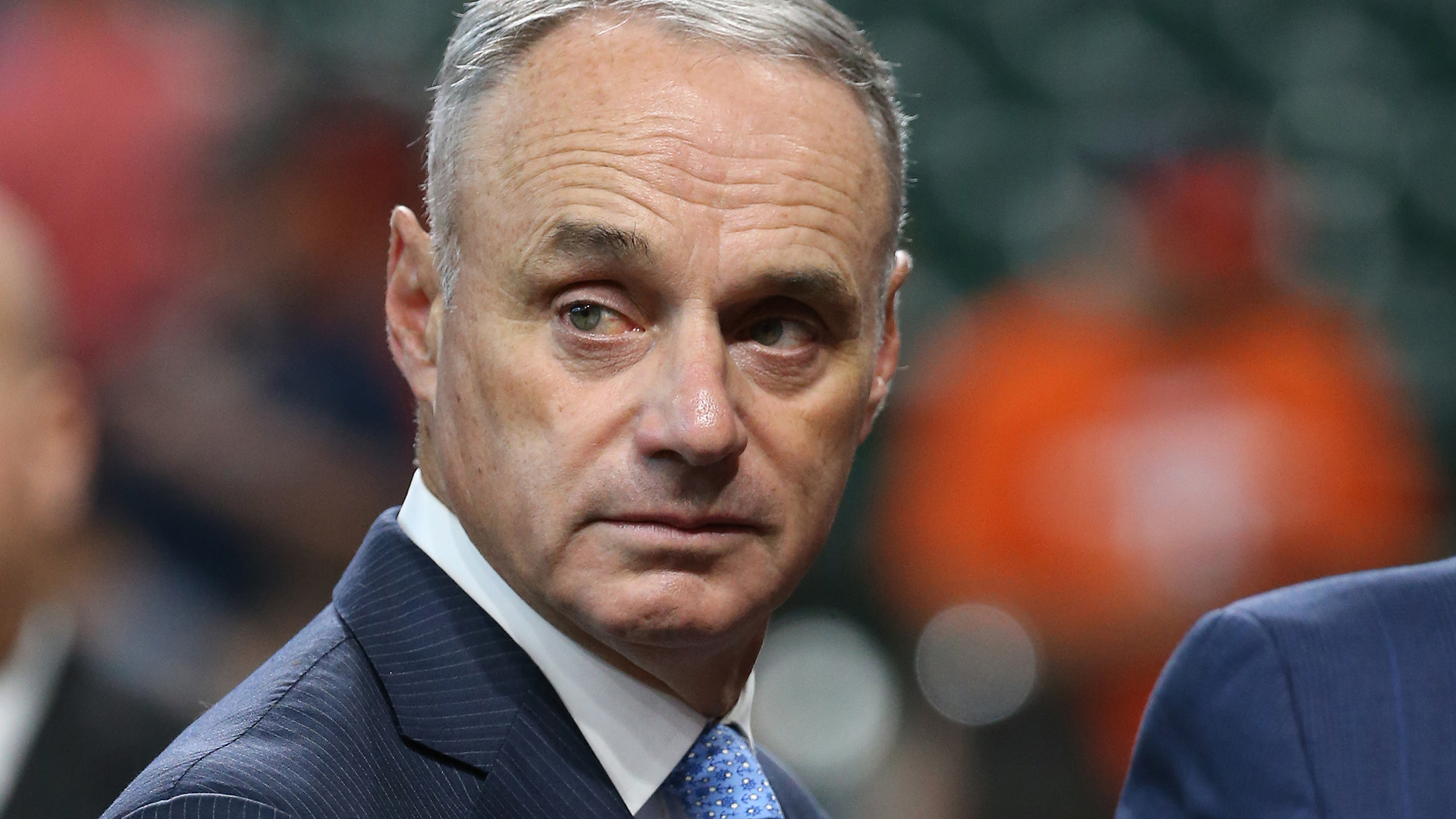 Put it all on the Astros? FRAUDS! They Ought to be Ashamed of Themselves.

Take a look at the picture above. Do you see that? He’s hiding something, that’s for sure. MLB Commissioner Rob Manfred seems to be looking over his shoulder a lot more often these days, and we know why.

First let me begin by making sure you understand the fact that when it comes to Major League Baseball, my allegiance is to the Houston Astros. I’m a homer, and I’m damn proud of it. What can I say? Not everyone in this world is lucky enough to be born and raised in the city of game; the home of candy paint, trunks poppin’, tops droppin’, syrup flowin’, Mattress Mack knowin’, DJ Screw jammin’, Bud Adams slammin’.

I digress, but the aforementioned info will hopefully help you to understand my bias. Transparency should always be a key component to how we live our lives. Without it, trust breaks down within the institutions of our civil society, and believe you me, Major League Baseball is as much an American institution as Rob Manfred is a Trump hater. I kid. I kid. However, I cannot say I’d be surprised if in fact he were. It’s eerily similar how this whole Manfred saga echoes the Obamagate narrative. They’re both evil tales of the efforts of major American institutions to cover up wrongdoing.

U.S. District Court judge Jed S. Rakoff announced yesterday, Friday, June 12th, that he would be unsealing a letter that was written by MLB Commissioner Rob Manfred to New York Yankees’ General Manager Brian Cashman. The contents of the letter supposedly implicates the Yankees in an even “more serious, sign-stealing scheme” than had been previously revealed by Manfred and the MLB in 2017.

The letter emerged as one of the key documents in a $5 million class action lawsuit brought by Kristopher Olson and approximately 100 other plaintiffs. The suit was filed against the MLB, the Boston Red Sox and the Houston Astros. It alleged that these three entities owed the plaintiffs for damages incurred via DraftKings bets involving the Astros and/or Red Sox. Their reasoning was that money lost on bets could stem from the fact that these teams were cheating, thus artificially influencing performance on the field. The judge threw this case out in April.

It was on appeal, by way of legal discovery, that Olson and his legal team found the letter written by Manfred to Cashman. The appeal was thrown out last week, but the letter will be released to the public on Friday, June 19th. The wish of the plaintiffs is for the full release of the letter, and Judge Rakoff has conditionally acquiesced.

Houston and Boston Continue to be Victimized

What the hell was I thinking? In a real American court of law, Lt. Gen. Michael Flynn continues to be railroaded by a leftist judge with a political agenda. Should I really expect Major League Baseball to emerge as some legal bastion of proper justice when our federal judiciary can’t even get it right? Flynn, a three star general, was set up by the FBI. They created a perjury trap that changed his life forever. Despite the fact that declassified documents definitively showed that Flynn was innocent, his case is still unresolved. It’s unresolved, because the judge wants it that way. It is among the most frustrating things to look on as justice is applied unevenly to different parties. To be clear, Flynn is innocent. The Houston Astros are not.

Nevertheless, here we see one of the most blatant displays of hypocrisy in the history of American sports. As the Astros continue to take heat for their involvement in their sign stealing saga, I wonder if any Yankees players will engage in some soul searching. Will they retract their social media posts that skewered the Astros when the news broke about their cheating?

What kind of a person gets joy from ridiculing people for committing the same sin that they themselves have committed?

It is imperative that Commissioner Manfred resign immediately. He clearly concealed evidence of wrongdoing by the Yankees. He is complicit in this Yankees sign stealing scandal.

As for Judge Rakoff; he needs to stop enabling the Yankees. At the request of the team, he is allowing them to edit and make redactions to Manfred’s letter prior to its public release. Does that make any sense? The perpetrators will be allowed to doctor evidence against them. Unbelievable!