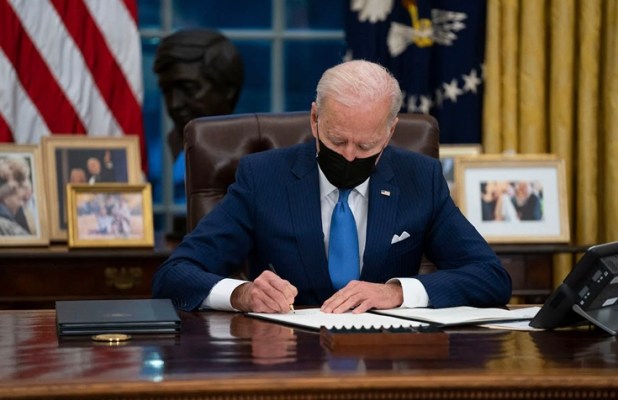 A former adviser to Bill Clinton has raised the alarm about Joe Biden’s leadership, warning Americans that the Democrat is turning the country into a “totalitarian state before our eyes.”

Dr. Naomi Wolf, who worked on Clinton’s reelection campaign in 1996, warned America that Biden’s administration is using the COVID-19 pandemic to “strip us of our rights.”

She made her comments during an appearance on Fox News’s “Tucker Carlson Tonight” Monday – the same day the U.S. surpassed 500,000 deaths since the start of the pandemic.

Wolf told host Tucker Carlson that in her view, the United States is swiftly “moving into a coup situation, a police state” as a result of Biden’s ongoing coronavirus-related economic shutdowns.

The feminist author and former Democratic aide added that she believes the orders are being improperly extended under the “guise of a real medical pandemic.”

“That is not a partisan thing,” Wolf told Carlson.

“That transcends everything that you and I might disagree or agree on,” Dr. Wolf added.

“That should bring together left and right to protect our Constitution.”

Wolf has ramped up her warnings against extended lockdowns on Twitter in recent months, according to Fox News.

In November, the author wrote on Twitter that Biden’s openness to reinstating additional shutdowns made her question her decision to vote for him.

“The state has now crushed businesses, kept us from gathering in free assembly to worship as the First Amendment provides, is invading our bodies … which is a violation of the Fourth Amendment, restricting movement, fining us in New York state … the violations go on and on,” she said.

The outspoken liberal, who previously authored a book outlining the ten steps that “would-be tyrants always take when they want to close down a democracy,” believes Joe Biden and the Democrats are leading the United States toward what she refers to as “step 10.”

“Whether they are on the left or the right, they do these same ten things,” Wolf explained.

“Now we’re at something I never thought I would see in my lifetime … it is step 10 and that is the suspension of the rule of law and that is when you start to be a police state, and we’re here.

“There is no way around it.”

Wolf said she has interviewed U.S. citizens of various backgrounds and political affiliations who are in a state of “shock and horror” as “autocratic tyrants at the state and now the national level are creating this kind of merger of corporate power and government power, which is really characteristic of totalism fascism in the ’20s,” she told Carlson.

“They are using that to engage in emergency orders that simply strip us of our rights; rights to property, rights to assembly, rights to worship, all the rights the Constitution guarantees.”

Wolf called the United States’ overall response to the coronavirus pandemic “completely unprecedented,” arguing that “lockdowns have never been done in society and really, we are turning into a of totalitarian state before everyone’s eyes.”

“I really hope we wake up quickly,” she said.

“Because history also shows that it’s a small window in which people can fight back before it is too dangerous to fight back.”