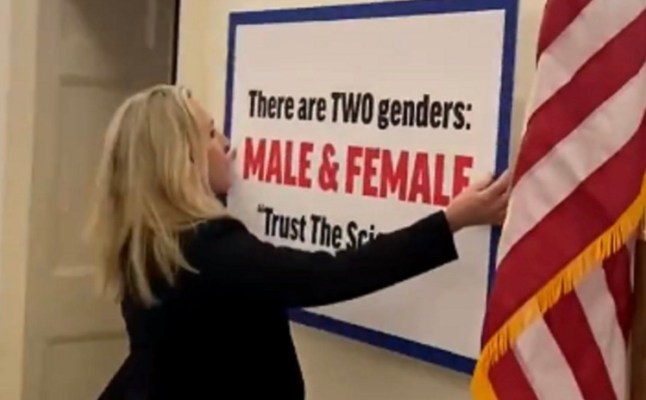 Rep. Marjorie Taylor Greene is having a hallway war with her Democrat neighbor Rep. Marie Newman — and she is definitely winning.

Rep. Newman had a tantrum on Wednesday after Rep. Greene voted against the so-called “Equality Act,” which would force girls to compete with biological boys in school sports and stomp on religious liberty laws.

The petulant Democrat decided to post a video of herself hanging a transgender flag outside of her office, which is directly across from Rep. Greene’s.

“Our neighbor, @RepMTG , tried to block the Equality Act because she believes prohibiting discrimination against trans Americans is ‘disgusting, immoral, and evil.’ Thought we’d put up our Transgender flag so she can look at it every time she opens her door,” Rep. Newman wrote, adding the winking and trans flag emojis.