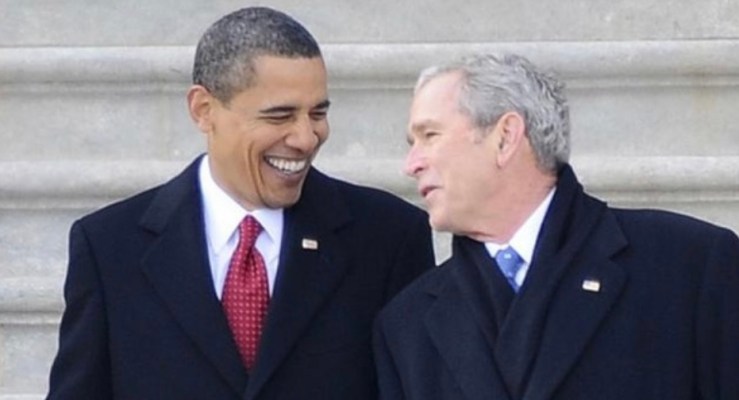 Barack Obama often makes a joke in his campaign speeches about a genealogical survey last year that found he is a distant cousin of Dick Cheney. Now there is double bad news for Obama: a new survey out today found he is related to George Bush as well.

Researchers at the New England Historic Genealogical Society, founded in 1845, said Obama, the son of a white woman from Kansas and a black man from Kenya, can call six US presidents his cousins: both Bushes, Ford, Johnson, Truman and James Madison.

The genealogical society, a non-profit organisation, found he is also related to Churchill.

The organisation said it investigated the bloodlines of the three presidential hopefuls. One of the oddest is that Obama is related to Brad Pitt and Hillary Clinton to his partner, Angelina Jolie.

Clinton, who is of French-Canadian descent on her mother’s side, is a distant cousin of Madonna, Celine Dion and Alanis Morissette. Other distant cousins include writer Jack Kerouac and Camilla Parker-Bowles.

While family trees such as these throw up interesting histories and links, genetically they are meaningless. While children carry half the genes of their father, cousins as far removed as Obama and Bush would have no more genetic link than someone they bumped into at random in the street.

The Republican candidate, John McCain, had claimed to be related to the Scottish king, Robert the Bruce, but, as the Guardian disclosed last week, British genealogists debunked that.

The New England genealogists who spent three years researching the background of the potential candidates found no royal strain either but established yet another Bush connection: McCain is a sixth cousin of the first lady, Laura Bush.