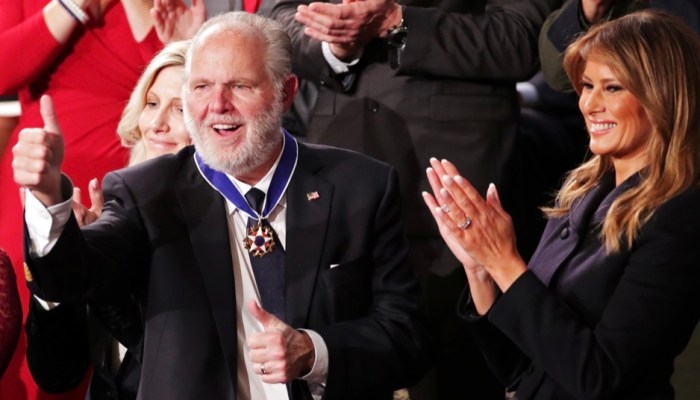 Rush to judgement? Absolutely! So many did when “the Father of Talk Radio” took to the airwaves in the late 1980s. Often people forget that there were approximately 1200 talk radio shows on the air in America at that time. More than 30 years later, that number has grown ten fold. For so many Americans, Rush kept the Reagan Revolution alive.

Rush Limbaugh was railroaded over and over again by America’s liberal elite. There is no other way to put it than to describe his situation as one most would shy away from. Furthermore, what’s apparent is that Rush was indeed the man for the job, because he possessed both talent and courage. It went beyond radio talent for him. In a rush to judgement, illicit schemes to damage his reputation throughout the years always seemed to be foiled. The more he marched on, the more his verbiage resonated with the American people. Whether or not they knew it, Ronald Reagan and Rush Limbaugh were a tag team of destruction to the Left, and they knew it. By 1988, many liberal politicians wondered if they would ever be able to win another presidential election.

Those on the Left would have you believe that Rush is the Anti-Christ. After all, he stood for freedom, liberty and the pursuit of happiness. Make sense? Of course not, but what the hell does to these goons. Their rush to judgement was never more than a faux statist attempt to attain power at all levels of government.

The ends justify the means for these people. It was never about Rush. On the contrary, it was about his power, both potential and attained. Deep down, they likely knew from the very beginning the threat he posed to their sick and twisted media monopoly. It’s one thing to preach about America’s freedom of the press to the masses. It’s quite another to go after those who embody such a thing. Yet, this is exactly what they did.

Like Presidents Reagan, Trump and all patriots, Rush Limbaugh is having the last laugh. In the end, the dilapidated America we see around us will be torn down, because the truth is going to set us all free. Brighter days are ahead, for as Rush has led us through darkness and into the light of the truth, we are humbled to continue this wonderful journey; the one Rush’s legacy has inspired us to continue.

Never forget. If evil men conspire against you in a rush to judgement, rest assure that God himself will be doing the same for you. Those who do God’s work endure the most suffering, but it is in this earthly crucible that Our Father sculpts us into people worthy of entering into His kingdom. Let them judge. Their judgement flows from the knowledge they have acquired about God’s judgement of you and they in the near future.

Rest easy Rush! Thank you for your many years of inspiration and guidance. We shall see you soon!

comey Just the tip of the iceberg
Marjorie greene has courage