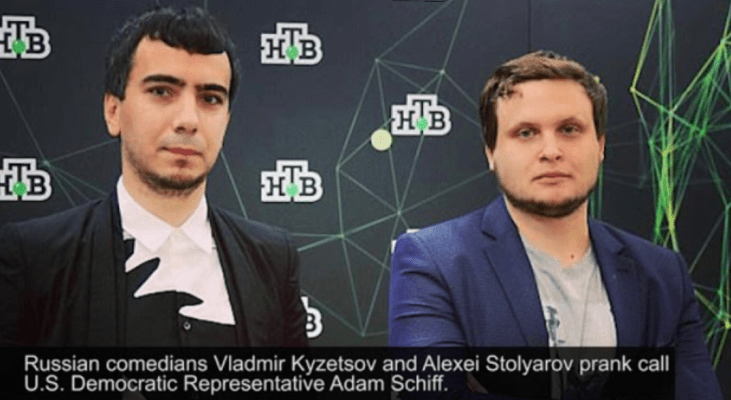 Left Wing Hack Democrat Congressman Little Russian Adam Schiff (CA) responded to House GOP Intelligence Committee Members’ request that he resign. Listen closely, as you will soon find out that he does exactly what he is accusing Trump and his campaign of. He is inconsistently critical, as you can see here within the context of this Adam Schiff Russian Audio.

Here is Little Russian Adam Schiff being duped by two Russian comedians who are each playing the role of Russian agents. They obviously know how stupid he is and are able to easily prank him by offering dirt on Trump. Little Russian Adam Schiff is eager to get said dirt. Hmmmm…that’s weird. In the previous video his accusation is that if you’re willing to accept dirt on a politician from the Russians, you are a criminal. This footage is great! It is the cornerstone portion of this piece. Take a look!

Incredible! Is this Adam Schiff Russian Audio not collusion? Uuuuhhhhh I think so. It’s also a bit creepy. Let’s be quite honest here. If you’ve seen him; if you’ve heard him speak, you know exactly how weird this guy is. More than likely picked on as a kid, Little Russian Adam Schiff has a vendetta, and he’s taking it out on the President of the United States. The problem with people like Schiff is that they can’t protect themselves and therefore advocate the idea that an all powerful bureaucratic government must exist to protect lazy and weak people from being criticized or bullied. People are too scared of hurting each other’s feelings nowadays.

Speaking truth to those whose lifestyle should be criticized is forbidden by Leftists like Congressman Little Russian Adam Schiff. They are only tolerant of the things that suit them. Therefore, they are intolerant. So when these idiots, like Schiff, accuse the President of the United States of colluding with the Russians, apparently it is okay for them to do exactly what they’re accusing someone else of doing. They wouldn’t know the truth if it kicked them in the nuts. Truth to them, via their double standards, is just whatever the hell they want it to be. Little Adam Schiff enjoys playing the roles of judge, jury, and executioner.

CONGRESSMAN LITTLE RUSSIAN ADAM SCHIFF IS A FRAUD. HE IS A HYPOCRITICAL LEFT WING HACK. HE MUST RESIGN IMMEDIATELY.

AS A CONSERVATIVE ARE YOU WORRIED?
REPUBLICAN TALKING POINTS
ADAM SCHIFF IS ‘SICK’
shadow gate