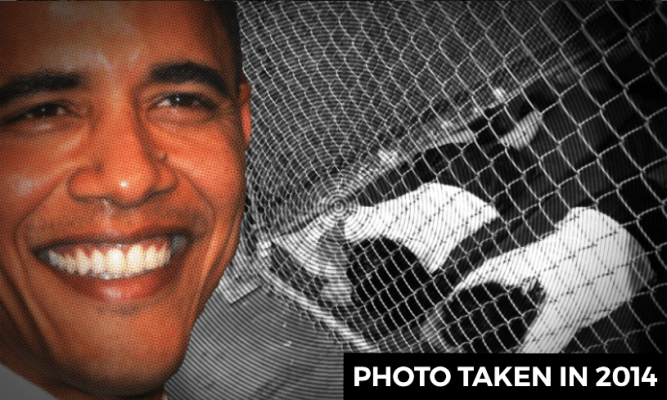 It’s time we let well enough alone and let bygones be bygones. I’ve had my issues with CNN over the past couple of years and for good reason I suppose. After all, they have been and continue to be the posterchild for fake news. However, in an effort to extend my hand in friendship to this deranged and pathetic news network, I have decided to do some work for them. I pray my words here do not fall on deaf ears, but we all have free will. The choice to accept my free labor on behalf of their corporation is theirs and theirs alone.

On October 1, 2018, Ms. Alice Driver penned an article for CNN entitled 13,000 Migrant Children in Detention: America’s Horrifying Reality. You may read the original article by clicking on the link above. In order that I may save CNN the headache and some work, I am going to go ahead and update Ms. Driver’s article for them. They are more than welcome to acknowledge my edits and rerun the article to reflect the current administration’s policies.

Now to be clear, Ms. Driver acknowledges the fact that there were approximately 13,000 migrant children in federal HHS detention at the time she wrote her article. I do believe that many readers would agree with me when I say that, “numbers should not and do not matter here. One child in federal detention is one too many.” Therefore, please don’t focus on the number 13,000 in my revision. Whether it be 1 or 13,000, this issue is still newsworthy, and once again, I do believe many readers would agree with that sentiment. Due to a lack of reporting on Joe Biden’s child cages, I am not aware of the approximate quantity of child migrants he has in cages. It is for that reason that we’ll just stick with the 13,000 number. After all, the number here does not matter. One is one too many.

Driver’s article also includes snippets of her interviews with a girl named Milexi and a boy named Alexis. I believe you would agree that both Milexi and Alexis are who they are, but they are also representative of any and all of these migrant children.

I would like to expressly acknowledge CNN at this time for the gratitude they are sure to show me in the future. “CNN, you’re very welcome.”

My edits in orange

(CNN) — Pretend you are a child far from home. Without warning, federal officers rouse you in the middle of the night, put you on a bus and send you across the United States to live in a tent city constructed in a desert wasteland, where winter temperatures hover around 30 degrees like they did last week.

You will be provided schooling, classes of all kinds or books at the expense of the American taxpayer while American citizens are not permitted to go back to school because of COVID. You will spend the next few months with thousands of other children, wondering if and when your childhood will be returned to you.

You have fled unimaginable violence, have crossed entire countries alone, only to find that your right to request asylum requires that you first survive a camp that more closely mirrors a place for interned prisoners than for children.

According to The New York Times, this is the reality for some 13,000 migrant children being held in detention centers across the country. The aggressiveness of the Biden administration’s policies toward migrant children has created a new term – “tender age shelters” – language which ironically obfuscates the truth about the billion-dollar business of holding children in shelters run by some of the same private companies that operate prisons.

As the Biden administration ramps up the use of of tent camps built by both the Obama and Trump administrations, what remains clear is that the big business of detention centers for migrant children will only continue to grow, and that few safeguards are in place to ensure the health and well-being of those children.

What makes this particularly pernicious is that the children at the center of this story are fleeing the gravest situations imaginable. “I dressed as a man,” Milexi, 16, told me. She fled Honduras, traveling alone through Guatemala and Mexico and train-hopping her way to the US-Mexico border. Milexi made the difficult decision to flee a situation in which she had been raped since age 7 and had been threatened by numerous gangs.

She is slight, but she is confident and tells me she is very good with maps and directions. When I spoke with Milexi in August in Reynosa, Mexico, she was planning to cross into the United States and request asylum. She had survived so much, and yet I feared she would suffer under the Biden administration’s current immigration policies.

In Tornillo, Texas, where one of the largest detention camps is, children live in a space enclosed by a chain-link fence topped with barbed wire. The tent city, which brings together so many children without offering them any structure, seems like it could turn into a scene from “Lord of the Flies.” To put this situation in context, Tornillo was designed to house 450 minors, but the government now plans to house up to 3,800 children there.

I had hoped to visit the camp when I was reporting from the border in June, but members of the press have not been allowed to tour the camp. The New York Times reported that access to legal services in Tornillo was limited.

Molly Crabapple reported extensively on how Immigration and Customs Enforcement has tried to stop journalists from reporting on detained immigrants. And several workers at these detention centers for minors have been charged with sexual abuse, so one can only imagine the horrors that take place daily without the checks and balances that a free press provides in such situations. ICE has denied allegations of abuse and a Biden administration official even asserted that these camps are “more like summer camp.”

If I were allowed to interview the children in Tornillo, I would find out what that means, because we as US citizens need to know how the rights of children are being limited and what the implications are for the human rights record of the administration.

When I think of these children, I think of the many migrant children, like Milexi, who I have interviewed as a journalist. Some have been as young as 8 and have traveled alone from El Salvador, Honduras, Guatemala and Mexico to the United States.

I also think of Alexis, 15, from Puebla, Mexico, who traveled to the United States to be reunited with his father in August. He crossed the border from Reynosa into McAllen, Texas, where he was apprehended by border patrol and deported back to Reynosa. When I interviewed him in August, he was living in a shelter for migrant minors in Reynosa.

Who among us could fault a child for wanting to be reunited with a parent? I am unaware of a human rights framework is which the punishment for such transgressions is sending children to live in a tent in the desert surrounded by a barbed wire fence – or even back across the US-Mexican border. But, if we are going to detain children, we must do it humanely and provide them with full legal support.

As Biden and his supporters have pointed out, President Barack Obama’s administration also housed some children in tent camps. The difference is that Obama did it temporarily at the height of the unaccompanied migrant minors crisis in 2014, while Biden has made it a standard practice, steadily increasing the number of children being detained from 2,400 to 13,000 over the last year, doubling the amount of time children spend in detention and creating prison-like conditions, rather than placing children in foster homes or with relatives.

A spokesperson for the Department of Health and Human Services told The New York Times that the growing number of detained children is “a symptom of the larger problem, namely a broken immigration system,” and that is why HHS joins President Biden in asking Congress to reform the system as quickly as possible.

In the meantime, though, we should implement a new test: Would President Joe Biden send his grandchildren to live in the Tornillo tent camp? If not, the United States should not be sending migrant children to live in such inhospitable conditions.

So much of the lives of these migrant children is determined by forces beyond their control; their original sin is being born in a place where violence forced them to flee. The irony is that children like Milexi have the wherewithal, intelligence and strength to travel the length of Central America alone, but they may be harmed at the hands of the current US migration system.

If the United States continues to treat children like prisoners, the question is not if but when they will start to die under such conditions.