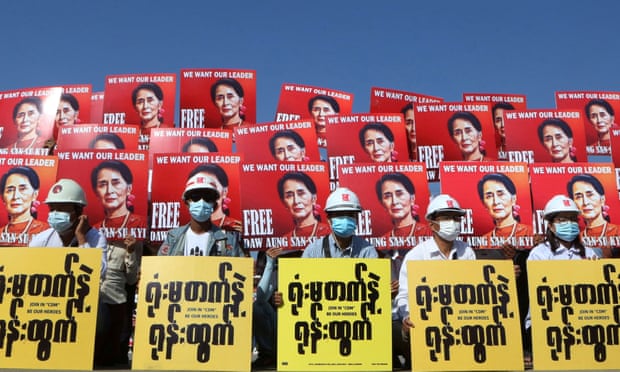 Myanmar’s junta ordered the shutdown of the internet for the second night in a row as it intensified a crackdown on protests two weeks after it staged a coup.

The military has escalated military efforts to quell an uprising against their seizure of power, which saw civilian leader Aung San Suu Kyi detained along with hundreds of others, including members of her democratically elected government.

On Monday, images and reports from the city of Mandalay showed police and soldiers using rubber bullets and slingshots to disperse protesters. A student union in the city said several people had been injured.

On Tuesday, another internet blackout blanketed Myanmar, dropping connectivity to 15% of ordinary levels, according to UK-based monitoring group NetBlocks. “Myanmar is in the midst of a near-total internet shutdown for a second consecutive night” as of 1am local time (1830 GMT),” NetBlocks tweeted on Tuesday morning.

The generals imposed a similar hours-long internet shutdown in the early hours of Monday and ratcheted up the military’s presence across the country, including armoured vehicles in Yangon, the nation’s commercial hub and biggest city.

She has spoken to the deputy commander of the Myanmar army, Soe Win, and “made our concerns about this very clear”, according to deputy spokesman Farhan Haq.

Early on Tuesday, the UK embassy in Myanmar admonished the regime for its attack on journalists and for imposing another internet blackout, tweeting: “The assault on freedom of expression must stop.”

Tuesday’s internet blackout is the fourth since the coup ended a decade-old fledgling democracy after generations of junta rule.

But cutting out internet connectivity – and a step up in arrests – has done little to quell resistance that has seen huge crowds throng big urban centres and isolated frontier villages alike.

The shutdown comes a day after protesters took to the streets in defiance of heavy troop presence around Yangon – although turnout was smaller than in recent days.

“Patrolling with armoured vehicles means they are threatening people,” said 46-year-old Nyein Moe, among the more than 1,000 gathered Monday in front of the Central Bank, staring down armoured vehicles parked there. “We can’t stop now.”

By afternoon, news of a strong police presence at the city’s headquarters of Suu Kyi’s National League for Democracy (NLD) party drew thousands to the scene. They chanted “End military dictatorship” as the officers stood guard.

A demonstration led by student groups in Naypyidaw was met with force after the gathering had retreated. Police also arrested dozens of the young protesters, though some were later released.

Mandalay, the country’s second largest city, saw a clash which left at least six injured after police used slingshots against protesters and fired rubber bullets into the crowd.

Demonstrators retaliated by throwing bricks, said a rescue team member who assisted with the injured.

“One of them needed oxygen because he was hit with a rubber bullet in his rib,” rescue team head Khin Maung Tin told AFP.

Journalists on the scene also said police had beaten them in the melee.

So far, more than 420 people – including striking workers – have been detained since the coup, according to the Assistance Association for Political Prisoners monitoring group.

Aung San Suu Kyi and President Win Myint are expected to be questioned by a court “via video conferencing” in the country’s capital of Naypyidaw this week, said lawyer Khin Maung Zaw, adding that he had not been able to make contact with either client.

Neither has been seen in public since they were detained in dawn raids on 1 February, the day of the coup.

UN special rapporteur Tom Andrews voiced his concerns about the court hearings, saying: “There’s nothing fair about the junta. This is theatre. It’s just theatre. And of course, nobody believes them.

“In a kind of an ironic way, the generals have proven their capacity to unify the country in ways that I have never seen,” he said. “They’re a unifier. But unfortunately for them, everyone is unified in opposition to them, and opposition to the idea of once again being under a brutal, military, authoritarian regime.”