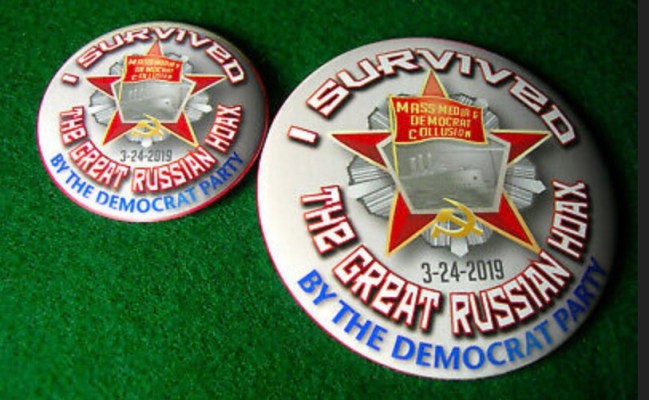 The egregious nature of what went on here in this country with the Russia Hoax is unprecedented in our history. This is, of course, a theme that can be seen throughout the content of this website. So why the repetition? This is why.

Think about it. At any time in this nation’s history, prior to 2016, has there ever been a fake narrative construed by an outgoing President of the United States that prompted the weaponization of the US Intelligence Community against the incoming administration? How about a resultant coup détat attempt against said administration alongside an effort to cover it up with a sham DOJ investigation that would last for 22 months? Moreover, are there any examples in the annals of history of a President of the United States subsequently being impeached when he was the victim of injustice? Of course not! The law was broken by the Obama Administration, and the Mueller Investigation was an attempted cover-up.

We are in uncharted waters here. With perhaps the exception of the Civil War, these are waters that are deeper than ones we have ever traversed as a nation. They are dangerous and worthy of our attention NOW! That this whole country is not worried and/or up in arms about any of this has me extremely terrified. What also has me worried is the idea of how close we actually came to never discovering the egregious crimes carried out at the direction of the Obama Administration. Had Hillary Clinton won the 2016 Election, all evidence would have all been buried at Main Justice, likely never to see the light of day.

After Making the Impossible Possible, They Believed an Impossibility Would Protect Them.

Four years ago the following questions could be answered with a definitive response of “No.” The faith we had in our justice system back then made responses of “Yes” to each almost impossible.

Today we know the answer to every single one of the above questions is “Yes.” These are only six examples of a myriad questions about the 2016 Election that if answered “Yes” would have blown people’s minds four short years ago. Today, the “Yes” responses are almost instinctive. What Americans never thought the DOJ and FBI capable of, quickly became a dark and disgusting reality.

The tale of the Deep State is one of arrogance. If they believed they were the only ones who could make the impossible possible, they were sorely mistaken. The man they thought could never win, well, won.

It seemed Democrats and Never Trumper Republicans embedded within the Deep State like a festering cancer never batted an eye to illegal surveillance on the Trump Campaign. Why? Maybe it was because no pigs had grown wings, hell remained hotter than a whore in church, bears had not stopped shitting in the woods and there was absolutely no way Donald Trump was going to be elected the 45th President of the United States.

And so it was. Well, sort of. In the end, pigs never flew, hell did not freeze over, bears didn’t all of a sudden become constipated, but Donald Trump did win the presidency. The Deep State was no longer protected at that point. Trump’s impossible win had been every bit possible in the end. As we know today, the Deep State panicked and began a cover-up attempt. It was the Mueller Investigation that was the attempted cover-up.

The email correspondence above is eye opening. Deputy Attorney General Rod Rosenstein was in communication with Bob Mueller for over three days before Attorney General Jeff Sessions was aware of what was going on. Media pressure, DOJ Deep State and congressional democrat persuasion had forced Sessions to recuse himself from the FBI investigation into so called Trump-Russia collusion on March 2, 2017. Despite his recusal from the FBI investigation, Rosenstein had no right to circumvent Sessions’ authority so as to open up communication with Mueller about a Special Counsel Investigation. Rosenstein did it this way so as to conceal it from the administration. The quicker Mueller and his team could be brought on board, the quicker the cover-up could begin. Furthermore, the less prepared the administration would be to react.

Rosenstein would call the White House to schedule a meeting between he, Mueller and President Trump in the Oval Office on May 16, 2017. This was a ploy to get Mueller into the Trump White House to get a feel for the man he would be investigating. Under the guise that Mueller was interested in the newly vacated FBI Director job, he and Rosenstein were welcomed with open arms by President Trump. If only the President knew then why Mueller was really there. God bless him! So many evil people surround him, trying to devour of him what they can.

Bob Mueller knew the day he began his investigation that there was never any Russian collusion with Trump and/or the Trump Campaign. However, his existence would ensure that all exculpatory documents would remain buried at the FBI. Any access to documents having to do with the investigation (FBI and/or Special Counsel) was prohibited as long as the Special Counsel Investigation was ongoing.

The Deputy Attorney General at the time, Rosenstein claims that he allowed Mueller to dictate the scope memo for his own investigation. This is precisely how the Left and the Never Trumpers are making America great again. Not only are they complicit in allowing degenerate anarchists destroy our cities, but they would also like to make sure our justice system looks similar to some fake third world tribunal.

Rod! Bob! This is AMERICA, not Mexico, Ethiopia, Albania, Moldova, Guatemala, or Ghana! Who in the hell makes a deal with the lead on a Special Counsel unbeknownst to the Attorney General? Moreover, who lets him draft the scope memo for the investigation and allows this thing to get off the ground? There was never evidence of a crime for the predication of this investigation. NEVER!

Despite that fact, Mueller is permitted to create the scope memo, and he and his team are allowed to wait in the wings to catch an administration official or the President himself in an obstruction trap. Months go by and no obstruction occurs. Knowing full well there was no collusion at the very beginning of the Special Counsel Investigation, Mueller and his team don’t end things before the midterm elections in November of 2018. Of course they don’t. The goal here is to leave a cloud over Trump so that they can help the democrats take back the House and Senate. In the end, they get the House back but not the Senate. After having waited so many months for the President to slip up and obstruct justice, they finally decide to shut their circus down in March of 2019. Having found no evidence of obstruction of any kind, they claim that it may have occurred with the firing of Comey. Mind you, Comey is likely headed to federal prison once Durham is done with him.

The open question of obstruction is meant to be the predicate for presidential impeachment. However, congressional Republicans have other ideas. They so thoroughly dismantle a demented and senile Mueller in hearings before the House Judiciary and Intelligence Committees in July of 2019 that the Russia Hoax has to be thrown out. It’s abundantly clear at that point in time that the Mueller Investigation is an attempted cover-up.