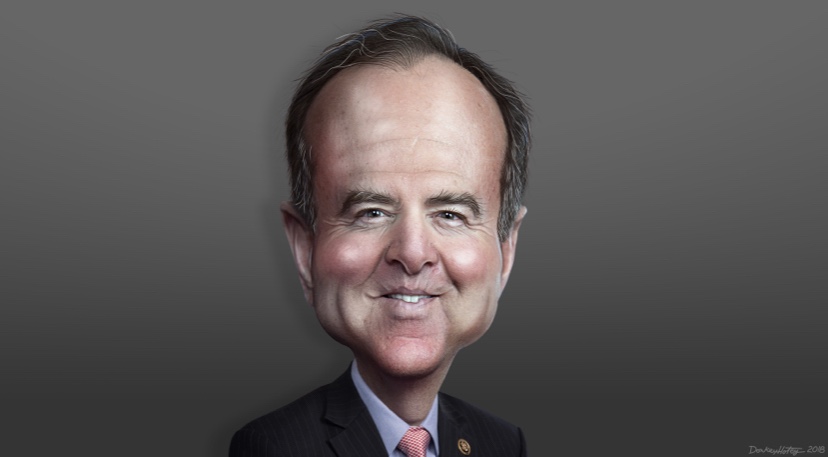 Adam Schiff needs to stop. Does this guy really think he’s doing the right thing? If he does, perhaps it’s time his colleagues help him understand that history will NOT look kindly upon what he is doing. Schiff is no hero. He is an unethical reprobate who is annoying the shit out of America. He’s also a pathological liar, and an unethical person driven by deep hatred of the president.

President Trump’s impeachment trial has begun, and Pencil Neck Adam Schiff is at it again. With his eyes bulging out of his head like a sick toad, his bullshit echoed from interior wall to interior wall of the Senate chamber. Schiff wants the Senate to subpoena Office of Management and Budget (OMB) documents, other documents, emails, etc. I’m here to share words of wisdom for Schiff: “Not gonna happen brotha man Pencil Neck Adam Schiff. You and your other democrat reprobates in the House may have attained an extremely slim majority in 2018 with your buddy Mueller’s help, but the Grand Ole Party makes the decisions in the Senate. Moreover, they have the law on their side!”

A president is authorized to furnish military assistance, on such terms and conditions as he may determine, to any friendly country or international organization, the assisting of which the President finds will strengthen the security of the United States and promote world peace.

Section 503 of the Foreign Assistance Act

GOP reps in the House have had enough. The President has had enough. They are calling for Pencil Neck Schiff to step aside and have been doing so since the end of May. He has gone way too far in using his power as a committee chairman to put unrelenting and unnecessary pressure on President Trump. Mr. Schiff has become the new modern day Joe McCarthy with his endless investigations and plots designed to thwart and ultimately destroy the President of the United States. We wholeheartedly support the GOP in their efforts.

Perhaps you’ll remember the Capitol Hill Circus that was previously addressed right here on this site. Well, there comes a point in time when every circus must end. Rep. (Reprobate) Pencil Neck Adam Schiff (D-CA) is a liar. He falsely announced to the American people that neither he nor anyone on his staff had previous contact with the whistle blower. The New York Times has just confirmed that he’s a liar.

So where do we go from here? The good news is that Attorney General Bill Barr is at the helm of the Department of Justice. The Adam Schiff Pencil Neck Circus Act is sure to be shut down sooner rather than later. It’s important to be patient and allow justice to take its course. In Barr we can trust. Furthermore it’s important to understand that US Attorney John Durham has been hand picked to lead the investigation into the origins of the Russia Hoax, the Bidens’ corruption in the Ukraine, the Deep State as a whole, etc. If there’s anyone who can get to the bottom of all of this liberal corruption, it’s Bill Barr.

A spokesman for House Intelligence Committee Chairman Adam Schiff, D-Calif., acknowledged for the first time on Wednesday that the whistleblower alleging misconduct in the White House had reached out to Schiff’s panel before filing a complaint — prompting President Trump, in an extraordinary afternoon news conference at the White House, to accuse Schiff directly of helping write the document.

An aide to Schiff insisted that when Schiff mentioned “we” had not spoken to the whistleblower, he was referring to members of the full House intelligence committee, rather than staff. NBC National Security reporter Ken Dilanian flagged Schiff’s explanation as “deceptive” late Wednesday.

“It shows that Schiff is a fraud. … I think it’s a scandal that he knew before,” Trump said, as the president of Finland stood at an adjacent podium. “I’d go a step further. I’d say he probably helped write it. … That’s a big story. He knew long before, and he helped write it too. It’s a scam.”

An aide says Schiff meant the full committee here. To me it seems like a deceptive answer.

Referring to Schiff  — a Trump antagonist who has long claimed to have surefire evidence that Trump illegally conspired with Russians — as “Shifty Schiff,” Trump characterized Democrats’ impeachment inquiry as a “fraudulent crime on the American people.” (Earlier in the day, Trump described the inquiry as “BULLS—,” and mocked Schiff as a partisan “lowlife.”)

At the press conference, Trump suggested Schiff had a “mental breakdown” and may have committed a crime by reciting an inaccurate, exaggerated version of a transcript of Trump’s fateful July call with Ukraine’s leader — a move that Schiff himself later apologetically acknowledged was a “parody.”

Schiff defenders are claiming there’s nothing to see here in the revelation that the whistleblower conferred with Schiff staff before filing the complaint. If that’s so, why didn’t Schiff acknowledge the contact when asked about it?

Trump also called Joe and Hunter Biden “stone-cold crooked,” citing Hunter Biden’s lucrative business dealings in Ukraine while his father was vice president. Trump went on to threaten litigation concerning what he called false accusations by “the fake news media” and “in many cases, the corrupt media.”

“He knew long before, and he helped write it too. It’s a scam.”— President Trump

Responding to Trump’s comments, whistleblower attorney Mark Zaid said in a statement to Fox News: “I can unequivocally state that neither any member of the legal team nor the whistleblower has ever met or spoken with Congressman Schiff about this matter.”

INTELLIGENCE WATCHDOG NOW CLAIMS WHISTLEBLOWER HAD FIRSTHAND INFORMATION, IN DEPARTURE FROM PREVIOUS SUBMISSIONS TO CONGRESS — INCLUDING THE COMPLAINT ITSELF

The whirlwind day in Washington kicked into gear when The New York Times reported earlier Wednesday that Schiff “learned about the outlines” of the whistleblower’s complaint “days before” it was filed.

Speaking to Fox News, the Office of the Adam Schiff Pencil Neck Circus Act denied that the intelligence committee had reviewed or received the complaint in advance, but largely confirmed the Times’ reporting.