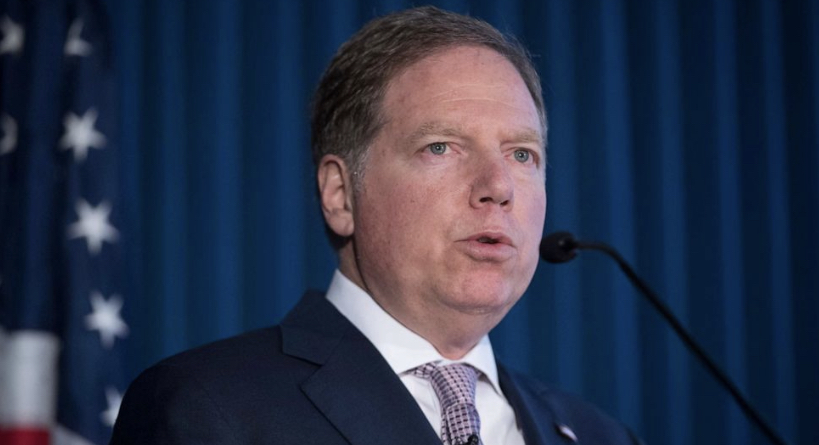 This is beyond comedic. Can you believe this? Nixon still takes up real estate in their brains. Between Nixon and Trump, there’s not much left there. Perhaps that’s the reason they struggle with cognition. I’m no neurologist, but I do my best to hypothesize about the left’s lack of intelligence when I can.

If you look at social media, especially Twitter, everyone and their mother it seems is making a HUGE deal about the resignation of SDNY Attorney Geoffrey Berman. Now let’s be clear; this is no resignation. Attorney General Bill Barr has asked Berman to leave. In other words, he’s been canned, fired, axed, let go, or however you’d like to describe it.

So why is everyone flipping out? Well it’s quite simple you see. These people still watch, read, follow, and/or parrot the fake news media. Like Pravda in Russia, America’s hard left democrat party state run media continues to mislead the people. Unlike Russia, however, America has alternatives. Still, many Americans prefer the fake news. Why? It beats the absolute shit out of me. God forbid I ever fall in line behind liars and propagandists. In the words of the esteemed Nancy Pelosi, “We pray for them.”

The problem here for the mainstream media is that they have minimized the importance of the release of the DOJ Inspector General’s Report on the Trump-Russia Collusion Investigation. It dropped in December of last year, and automatically network buffoons were touting the cleanliness of the investigation. Do you think they bothered to read the report? Of course they didn’t. That would likely be too difficult a task for these people.

Just imagine. Can you honestly see Fake Tapper sitting down to read an expansive government report numbering in the hundreds of pages? Me neither.

As a result of the media’s malfeasance, the American public has once again been misinformed. This, despite the fact that Inspector General Horowitz has made it quite clear that this was never even close to being a clean Investigation. In fact, it was quite dirty.

The Trump-Russia Collusion Investigation was illegal. It was predicated on FBI warrants to surveil Trump campaign officials. The illegality stemmed from the fact that the FBI went to the Foreign Intelligence Surveillance Act Court or FISA Court to obtain unlawful warrants. The Bureau claimed the intelligence they had on the Trump Campaign colluding with Russia (The Steele Dossier) was verified. Indeed, it was not. They lied to the FISA judges to obtain warrants for unprecedented spying on American citizens.

When the DOJ Inspector General’s Report was released in December, the FISA judges were none too happy. So while the frauds at mainstream media networks and publications gaslit the American people on this, the FISA Court began giving remedial instructions to Attorney General Barr. Those instructions prompted the AG to begin sequestration of certain federal circuit courts.

These were the courts that were taking on cases that Special Counsel Robert Mueller had handed over to them. The Southern District of New York (SDNY) received the bulk of casework tied to the wider Mueller Investigation. Bracing for the political fallout from all of this, the democrats and the media are working overtime to smear Barr once again. Hence the reason Rep. Jerry Nadler (D-NY) recently announced that he would be leading an effort to impeach the Attorney General.

US Attorney Berman runs SDNY, but because of the FISA Court’s request of sequestration, Berman must go. Those involved in botched investigations and erroneous judicial proceedings have to walk away. This is an important step that must be taken to remediate these injustices. It remains to be seen, but some of these DOJ officials and US attorneys may be indicted in the future as part of the ongoing Durham Probe.