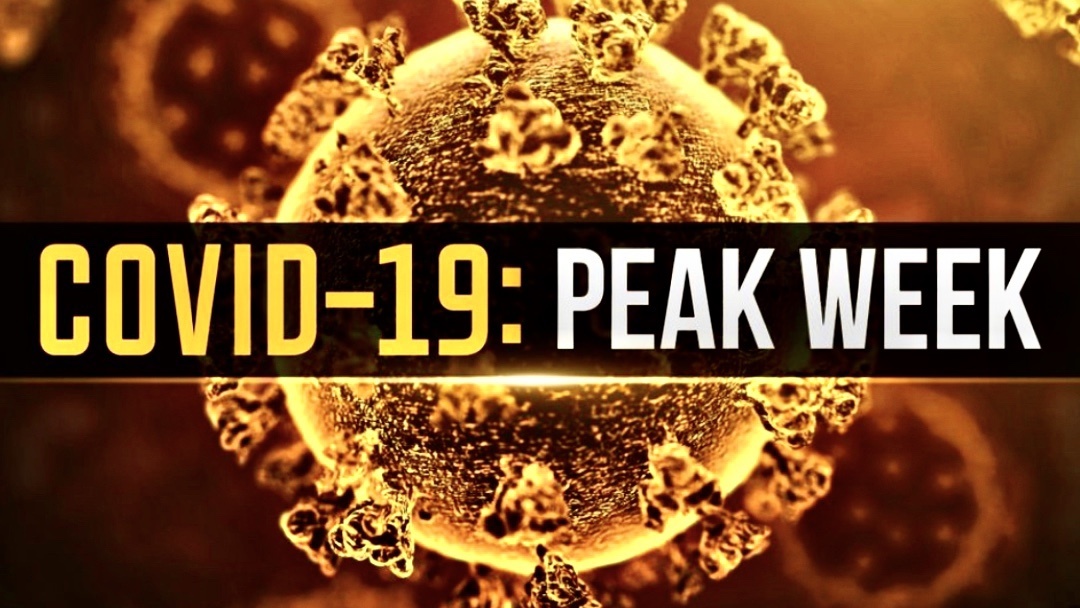 This is Peak Week!

As Americans continue to deal with all of the inconveniences that the Wuhan Coronavirus has created, hope abounds. How fitting it is that this hope comes to us during Holy Week. My hope is that history emphasizes the fact that Peak Week will have coincided with Holy Week. This year’s promise of hope on Easter has new meaning; a more pronounced meaning.

What Exactly is Peak Week?

Doctors and other health officials have predicted that the Wuhan Coronavirus mortality rate here in America is likely to reach its daily maximum on Easter Sunday. In any pandemic, once the daily deaths caused by the disease has reached its maximum, the trend begins to reverse course. Our hearts go out to the victims of this virus and their families. They have suffered a terrible ordeal, and for that we share our deepest condolences. Peak Week is bittersweet, as it is the deadliest week of a pandemic, but it is also the beginning of the end for the pandemic as well.

As we look back on the destruction this virus has wrought on America and her people, it is noteworthy to recount the most severe sins of a selfish, twisted, depraved and evil leftist mainstream media. Lap dogs for leftist politicians, they share a common characteristic with them. They are obsessed. And what are they obsessed with? The answer to this question is quite obvious of course. They are obsessed with the prospect of driving the President from office. They salivate over the idea. For them, Peak Week is a sign that time is running out. They must work harder than ever before to use this crisis as a vehicle for massive spending.

An Opportunity for Blame

As we look back on the destruction this virus has wrought on America and her people, as well as the rest of the world, it is noteworthy to recount the most severe sins of a selfish, twisted, depraved and evil leftist mainstream media. Lap dogs for leftist politicians, they share a common characteristic of obsession with those whose laps they occupy. And what are they obsessed with? The answer to this question is of course, quite obvious. They are obsessed with the prospect of driving the President from office. Liberal politicians and their media mouthpieces alike salivate over this idea. For them, Peak Week is a sign that time is running out. They must work harder than ever before to use this crisis as a vehicle for manufacturing faux blame on the President of the United States.

In the disgusting dark folds and crevices of their sick and twisted evil little minds, they mull over another desperate scheme. Insulting the intelligence of the American people, they ready themselves for a public relations campaign that is most assuredly going to be devoid of all semblance of truth. This one will be their worst “scheme become hoax” disaster, while simultaneously being their most immoral. Their plan is to blame the president for the misery wrought by the Wuhan Coronavirus and the tragic death and destruction it has wrought on the people of the world in its stead. Democrats in the House, with the guidance of their venerable leader, the always incoherent Nancy Pelosi, have already announced an investigation into Trump’s handling of this pandemic. Assisted by the always credible Chairman of the House Intelligence Committee, Adam Schiff, their priorities are clear. “Let’s try this again,” they likely tell themselves. “This may work this go around. We have to keep the pressure on the President elevated. Something’s got to give. He must not remain in office.” This is how corrupt democrat politicians and their media surrogates view Peak Week: an opportunity for more political degradation and division.

The sick irony here, is that once again, they blame the president for their own faults and failings. It was they who did absolutely nothing in preparation for the arrival of this disease. They were too busy trying to impeach and convict the president on another fabricated hoax. What’s equally disturbing is that they would hatch their little scheme as Americans continue to suffer and die under the weight of this awful sickness. The immorality of it all is unconscionable. These are some truly dark and depraved people who would likely be much better served by doing some soul-searching during Holy Week, instead of continuing to carry water for the devil himself.

What can I say? I guess if you’re missing the true meaning of Peak Week, you’re probably doing the same for Holy Week. As the most pure Nancy Pelosi says frequently about the President, “I pray for you.”

An Opportunity for Big Government

Peak Week is also a signal to democrats in Congress that the window for implementing their big government quasi socialist programs is closing. They’re using the pandemic as an opportunity to swiftly propose massive spending legislation to be rammed through Congress under the guise of relief. There’s no doubt the American people need financial assistance during these trying economic times. I believe it is the government’s responsibility to play a role in that assistance, but democrats are so reckless with their spending that their involvement has “poisoned the well.” A massive deficit spending package of $2.2 trillion? Are you kidding me? One can only imagine the gargantuan amounts of waste, fraud, and abuse that will accompany this legislative funding once Treasury begins paying people.

It’s extremely important to understand the fact that a large portion of the supply-side of our economy is no longer in operation at this time. This coupled with the printing of $2.2 trillion to be infused into the economy has the potential to lead to the degradation of the value of the dollar. When the value of the dollar becomes less valuable, more dollars are needed by consumers to purchase goods and services. Thus, we officially have inflation, and I can assure you that it is a nasty economic problem worth avoiding at all costs. It can take years to get it under control, and the process of doing so is quite painful for the economy.

The result of inflation is a contractionary fiscal policy instituted by the Fed. Reducing the size of the monetary supply is the only way to fight inflation. In order to shrink the size of the worldwide supply of US dollars, the Fed hikes interest rates to discourage borrowing. Thereafter banks are apt to borrow less money from the Federal Reserve. In turn, the banks have less to lend to the American people. Moreover, the demand for the American people and American businesses for credit (loans/borrowed money) decreases. As a result, the supply of the dollar in worldwide economic circulation falls. Less dollars in circulation equates to more value for our currency. The more valuable the currency, the less it takes to purchase goods and service. This is the process that has to take place in order to reduce inflation. High interest rates for a long period of time is an unavoidable side effect of working to control inflation.

US Debt Climbs to $25 Trillion

The majority of Americans are lacking in this knowledge. For many, the expansion of the government dole by politicians comes with no consequences. However, the fact of the matter is that growing the national debt, which now stands at approximately $25 trillion, can have devastating effects on our economic system.

Democrat designs for outrageous fiscal irresponsibility during Peak Week could potentially translate to numerous weeks in the future of unbearable economic pain.