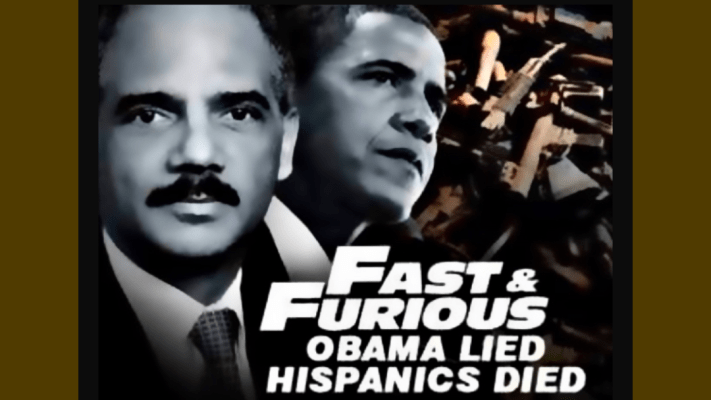 FORMER PRESIDENT OBAMA CLAIMS HE RAN A SCANDAL FREE ADMINISTRATION. NOTHING COULD BE FURTHER FROM THE TRUTH. THE DOUBLE STANDARD BETWEEN THE OBAMA DOJ & THE TRUMP DOJ IS APPALLING.

President Obama’s Attorney General, Eric Holder was held in contempt by Congress in 2012. For months his Department of Justice stonewalled congressional oversight of a Bureau of Alcohol, Tobacco and Firearms (ATF) operation code named Fast and Furious. The operation allowed for the sale of powerful firearms to Mexican criminals at the US-Mexico border. The idea was that the ATF was going to track these firearms in order to gain more intelligence about cartels who operate both south of the border and at the border itself. Eventually they would lose track of the guns that were sold. The problem really came to a head in a very big way when some of these weapons were used to murder thousands of Mexican nationals and a US Border Patrol agent.

The democrats in Congress could not care less about this unfortunate situation. The Republicans however wanted answers. When the Obama Administration claimed Executive Privilege and instructed Attorney General Holder not to release certain related documents to the Congress, the Republicans played the waiting game. Finally after approximately six months and no new information turned over to Congress, a contempt vote was held. The vote was divided along political lines. In the end, the majority voted to hold the attorney general in contempt. Putting these events into perspective, the serious nature of what had occurred is quite apparent. Border Patrol agents were murdered by firearms issued by the American government. When the administration was asked about the operation, they lied and stonewalled.

Now let’s compare that to the present situation involving Attorney General Bill Barr. It took democrats in Congress only days, not months, to hold Barr in contempt. He’s being held in contempt, because he refuses to release the whole unredacted Mueller Report to the American public. Doing so would mean that he would be breaking the law. It is unlawful to release 6(e) grand jury information to the public. In other words, Attorney General Barr is being held in contempt, because he is refusing to break the law. All congressmen and women are free to view the whole unredacted report in a private room at the Department of Justice. To date 0 democrats and 5 republicans have done so.

When comparing the Holder and Barr situations, one would have to be brain dead not to recognize the stark differences. Moreover the information democrats want is a report resultant of a fake investigation. The report itself is also available to the fullest extent it can be made available without breaking the law. This is how the democrats operate. Since they can’t bring Trump down by using the legal system, their goal is to make waves for the Election of 2020. The more controversy they create, the more their media friends will run with it and lie about it, thus spreading a false message to many in the American public that they could possibly believe. This has been a horrible strategy for democrats, because the more they harp on this, the more the president’s approval ratings go up. Keep it up idiots! We know damn well that Obama sold guns to Mexican cartels no matter how many times people try to cover it up.